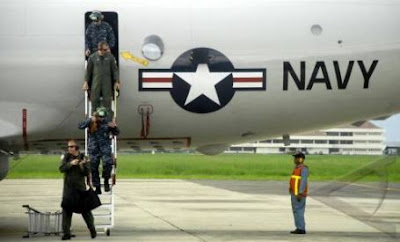 The exercise, part of the series of bilateral exercises known as Cooperation Afloat Readiness and Training (CARAT), contributes to regional maritime security by enhancing capabilities in areas such as interdiction, information sharing, anti-piracy and anti-smuggling.

"I would like to thank all of you, especially Rear Adm. Nora Tyson, for her help in these exercise efforts," said Margono. "I strongly believe that NEA 2010 will be a fruitful experience for all participants."

The U.S. Navy and TNI-AL have collaborated on major activities in the recent past; mainly in humanitarian assistance and disaster relief operations following the Dec. 2004 tsunami in Sumatra, and following a major earthquake in Padang September 2009.

Capt. Richard L. Clemmons, commodore of Task Group 73.1, explained why the partnership between the United States and Indonesia is paramount to success in Southeast Asia.

"Naval Engagement Activity Indonesia plays an important role in our Navy's Maritime Strategy of building global partnerships," said Clemmons. "NEA is a great opportunity to build upon our pre-existing relationship with our Indonesian counterparts and to learn from each other what can be accomplished through our combined efforts."

"The events planned for our NEA phase in Indonesia will help to promote our interoperability and foster better relationships with our Indonesian partners," said Clemmons.

CARAT 2010 features six original partner nations, Brunei, Malaysia, Philippines, Singapore and Thailand, plus Indonesia (where the exercise is called NEA). For 2010, two new CARAT participants include Cambodia and Bangladesh. The total number of forces scheduled to participate in the exercise include approximately 18,000 U.S. and partner nation personnel, 50 aircraft and 73 ships.

Email ThisBlogThis!Share to TwitterShare to FacebookShare to Pinterest
Labels: Latgab