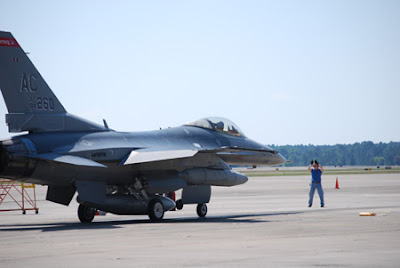 27 May 2010, JACKSONVILLE, Fla., -- The first retired F-16 Falcon arrived at Boeing's [NYSE: BA] Cecil Field facility in Jacksonville on April 22 to begin conversion into a QF-16 aerial drone. Boeing received a $69.7 million contract from the U.S. Air Force on March 8 for the first phase of the QF-16 program.

The Boeing-led team, which includes BAE Systems, will begin engineering, manufacturing and development of the full-scale manned and unmanned QF-16s during Phase 1. The drones will be used as aerial targets for newly developed weapons and tactics. They will be a higher-performing aircraft than the QF-4s they will replace.

The team will receive six F-16s during the program's development phase. After modification to the QF-16 configuration, they will serve as prototypes for engineering tests and evaluation prior to low-rate initial production. Up to 126 QF-16 drones will be converted beginning in 2014.